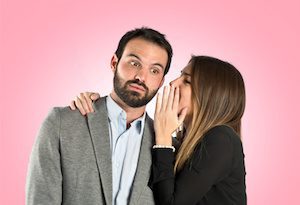 I’m sure you’re thinking…”But they’re women! They must understand what other women want!”

I’m not saying that you shouldn’t get a woman’s point of view on your dating life. But, their advice can actually hurt your chances more than it helps you.

And this isn’t because female friends want you to be forever alone. Their insight comes from a place of compassion – and that’s usually a big part of the problem.

Of course, there are always exceptions to the rule.

My best friend’s wife and I recently talked at length about relationships. She told me about her past frustrations with “nice guys” who’d always ask permission before doing anything. She now advises her own brother to be more forward and flirtatious with girls he likes.

I know a female matchmaker who has a deep understanding of attraction after years of experience. When her clients get friend-zoned, she tells them to be more bold and work towards creating a sexual connection.

But examples like these aren’t the norm. I know this because I’ve dealt with countless men who follow their female friends’ advice perfectly. Then they end up more frustrated than ever and can’t understand why.

They struggle to look past their own negative experiences with flirting

Many women have had horrible interactions with men. Drunk guys getting a little too handsy. Being cat-called. Receiving disturbing or threatening messages online. Even getting stalked in public.

Therefore, they don’t like to put other women in uncomfortable flirting situations. And I don’t blame them.

So they give guys advice to NOT flirt with a girl until they know she’s 100% interested. They talk about how flirting with a random girl is creepy and that you should never do it. Unfortunately, attraction doesn’t work that way.

The act of flirting, showing your interest, and taking initiative is what starts to turn women on. It positions you as a potential sexual partner. You HAVE to be assertive – playing it safe almost always makes women place you in the friend zone.

Plenty of of women will be open to flirting with you. But the only way to find out is to try. There’s absolutely nothing wrong with flirting as long as you’re flirting with respect.

They sugarcoat the truth

When you go to a friend for help, it’s usually because you’re feeling shitty. Your female friends care about you and want to make you feel better. The last thing they want to do is hurt you. That can make them nervous to tell you that you’re doing something wrong.

So often they will say…“You’re fine. You just haven’t met the right girl.” “Stop looking so hard and it will happen naturally.” “Just be yourself.”

You may take this to heart and then think that there’s nothing you need to change about yourself. You just need to find someone who will appreciate the real you. This causes you to blame your lack of results on external forces rather than ever taking responsibility for yourself.

And then, you don’t try to improve yourself or adjust your behaviors…and nothing changes. You become even more frustrated and blame everyone else. Instead, you may begin to resent women because of your struggles.

Improving your social skills and becoming a more attractive man is crucial to your cause. Taking a passive stance on your development won’t get you what you want. It’s not about changing who you are but rather learning to express the best version of yourself.

While your female friends may try to make you feel better, what you really need is someone motivating you to be better. That’s how you’ll fix your situation.

Women tell their guy friends that they just want a caring, romantic guy. This is why so many men believe that being nice is enough. But then when those guys act like that, they struggle to attract women.

Because when most girls give that advice, they’re thinking in terms of men they’re already attracted to. They’re not thinking about the qualities that get them attracted in the first place — qualities like assertiveness, leadership, a sense of humor, and a strong sexual presence.

So a lot of guys just take this “nice guy” advice to heart. They act platonic and are overly generous to girls they’re interested in. They become their best friends. They’re always there to help them and support them when they’re in need. And they get nowhere with this attitude.

It’s not about becoming a jerk and not being nice, it’s about expressing the qualities that build sexual attraction.

I even see this with online dating profile writing services. Guys hire professional women to produce their online dating profile. They usually end up getting a profile that’s dripping with cuddly sweetness but no strength, flirtatiousness, or masculinity. And the guys are left wondering why so few women respond to their messages.

You have to position yourself as a potential sexual partner first and foremost. In fact, acting too romantic too soon can be overwhelming. It makes women feel like you’re already thinking about your future relationship before she even knows what she wants.

Conversely, casual flirting and hooking up doesn’t feel nearly as big of a commitment. Once you guys get more intimate, that’s usually when a woman becomes more invested in you. Then you can start to show more of your romantic side and have her appreciate those qualities, too.

They feel shame about opening up about their true desires

Sadly, many women have dealt with sexual shame their entire lives.

They’ve been told by parents, friends, religion, and society that indulging in their desires is wrong. That if they embrace those feelings too early on, it makes them less valuable as a person.

It’s been hammered in that being too sexual is equated to being easy or a slut. So they unintentionally project that shame onto others. They advise guys to treat a girl like a proper “lady”, even though that’s not what actually turns them on.

It’s not easy for women to admit that assertive, ballsy guys are the ones who get them excited. It can be shameful to share stories about the thrill of hooking up or having a fun sexting exchange with a random guy. And it’s especially uncomfortable to admit how they want a dominant man in the bedroom.

As I discussed earlier, it’s the act of flirting that turns women on. Because of shame, some women have a hard time expressing or accepting that that’s what they respond to. But deep down, we all want someone make us feel sexy and connect with us on an intimate level.

They think about what works for them

A lot of women take their own dating successes and try to apply their strategies to men.

Most women have had guys they like pursue them. They can play a more laid back role and wait for men to approach — whether that’s in person or online. They can take a passive stance and have it consistently work out.

They then instruct men to do the same, expecting similar results. But they don’t realize how this method fails for the vast majority of guys.

Because in most courtship scenarios, women want men to take the initiative and lead. Self-confidence is what makes a guy so damn attractive. Those women usually don’t want to be the one making the first moves.

Can you get lucky and have a woman initiate from time to time? Sure. But it’s not nearly as common and if you’re always taking the passive route, you’re missing out on a lot of opportunities.

They talk about what they think they want, not always what they respond to

We are terrible at knowing what we truly want.

A lot of women would say their ideal man is six feet tall, handsome, and in great shape. But I’ve seen those same women fall madly in love with shorter, average-looking, or chubby men.

Many women claim they only want a classy gentleman. But when a bold, bad boy says some dirty stuff to them they go all googly-eyed (50 Shades of Grey much?).

See how confusing this all is?

Your girl friends advise you to be sweet and gentle to get more girls, yet you see them chasing guys who don’t match that description. The thing is, women aren’t being dishonest on purpose.

In our heads, we want the safe, reasonable choice that just makes sense. But our heart sometimes seeks more excitement, novelty, and risk that isn’t always rational. Emotion trumps our logical brain all the time.

Most women want a mix of both. They want a kind man who’s responsible and truly cares about them. But they also want him to have strong boundaries, be outspoken, and say sexy things.

This isn’t an argument against women’s intuition. In fact, women give great advice in related areas — they provide amazing insight on emotional intelligence and communication in relationships.

But we all have our strengths and weaknesses. And it just so happens that most women can’t instruct men on how to attract other women.

So next time your girl friends try to give you dating advice…maybe you should get a second opinion.