If You Aren’t Flirting, Neither is She 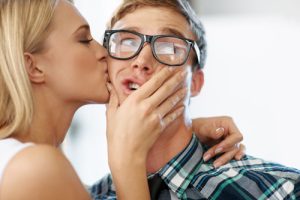 Alex was a frustrated mechanical engineer. Every girl he liked saw him as just a friend. They never flirted with him and there was no romantic connection.

Alex became bitter and angry towards these women. He blamed them for his lack of dating success.

I told him to send me some of his text messages, online dating exchanges, and a summary of his first dates. It was immediately clear to me where he was making his mistakes.

I asked him, “Why do you think these girls aren’t flirting with you?”

He replied, “Because I’m an engineer. I have a nerdy, uncool job. I’m not tall or muscular and I wear glasses. Mostly because I’m nice and I’ve realized that girls only want assholes.”

I shook my head. “It has nothing to do with any of that. Plenty of women will like you but not until you stop treating them as friends. Completely platonic talk gets you nowhere.

You’re not being honest with the type of relationship you want. Your intentions are ambiguous. You don’t show your interest in them from the start and therefore aren’t allowing them to be interested in you.

You need to flirt with them so they feel they have permission to flirt back. They need to get excited, laugh, and be turned on around you to see you as a potential sexual partner.”

Of course, he didn’t believe me. So we setup a Skype session and he shared his screen. Using his OKCupid account, he picked out a cute girl and I started a live chat with her.

For demonstration purposes, I pushed harder than I normally would. You could safely reduce the sexual forwardness in this conversation by half and still be effective. The point was to show him that being too forward is better than playing it too safe. And that the acceptable amount of flirting is higher than you think.

Me: I’m going to have to fight you on the hottest buns competition

[She had a picture of a sign that said “hottest buns” and she was pointing to her butt.]

Her: we’d have to collect a jury of our peers

Her: to judge the competition

Me: but they’d have be non-biased so we’d have to find third parties that don’t know either of us

Her: solicit some strangers

Me: our ass, as if we had one ass, united

[Poking fun at my typo.]

Me: actually im out, I don’t know if I can handle Siamese butts

Her: its ok, they wont be twins because mines better

Me: put your booty where my mouth is

[She’s teasing me so I challenge her back and make a statement of interest.]

Me: how’s it feel to be back in the steak world

[She wrote about recently ending her vegetarian streak and falling in love with steak.]

Her: i don’t even know what to say because the conversation is just going to go down from here

Her: i just ate one

Me: wow, you thought we’d have a terrible convo

[Teasing her for what I interpreted as resistance.]

Her: no it was just so perfect

Her: too much pressure

[Her qualifying (explaining) herself, complimenting me, and investing back in me.]

Me: haha I’m flattered, it was mostly you

Me: You’re fun, makes it easy

[Positively reinforcing her opening up to me.]

Her: you as well

[Building connection (rapport) by asking her about herself.]

Her: i honestly don’t know my steak cuts very well

Her: this one that i bought was just a thin cut

Her: too thin i think, i couldn’t cook it to be as rare as i wanted because i looked away for a sec and it was done

Me: man, you’re a home chef who had the confidence to admit what you didn’t know

Me: instead of bsing it to me, much respect

[Telling her I appreciate her honesty.]

Her: yeah you know

Her: what cut? the… meat part of the cow.

[Her being vulnerable and poking fun at herself, a very good sign.]

Me: I sometimes eat a steak and think how good it is

Me: that I would walk up to a cow and just take a bite nonchalantly

Me: I imagine that they wouldn’t get hurt. She’s just like “hey, how’s it taste today?”

Her: since i started eating red meat again

[Relating back with my own love for steak.]

Her: i am obsessed

Her: i feel the same

Her: i could eat a cow

Her: after apologizing first

Me: Have you tried Ruth’s Chris?

Her: no, it sounds fancy

Me: it’s a fancy steakhouse chain but not lame. In fact, it beats pretty much every other steak I’ve tried in Boston

Me: they flash cook it in a special 2000 degree oven, then drop it on butter so it sizzles in deliciousness all the way to your mouth

Me: is it weird that I’m slightly turned on by that 😛

[She asks to clarify. Many guys would back down but I hold true to what I said.]

Me: yeah nothing sexier than awkwardly drooling on yourself

Her: which is what i think drooling sounds like

[She accepts my flirtation.]

Me: please stop, the heat is getting too intense

Me: I’m feeling a little medium rare if you know what I’m sayin

[I continue to push with more sexual playfulness and innuendo.]

Me: so tell me a bit about yourself, what are you passionate about?

[I ease off the flirting and ask her something personal. I want her to know that I’m interested in her and not just sex.]

Her: well, i’m an animator

Her: and in addition to it being my major, it’s also my hobby

[She opens up and invests in me.]

Me: mhmm, I saw that

Her: i’m lucky to be so into what i do

Me: that’s rare, I can tell you’re very driven with it

[Approving of her investing in me.]

Her: i went to see ice age 4 today

Me: how was it

Her: oh my gosh

Her: ice age 3 is my favorite of the series

Me: we’ll have to watch it then

[Pushing to meet up and assuming she already wants to hang out.]

Her: i have it

[Her telling me she has it available.]

Her: have a copy on my computer

[Playfully implying we’re going to see each other that night.]

Her: no it was given to me

Her: by someone who does

Me: I knew you had a bad side

[Making a statement that she has a wild side.]

Her: maybe a little

Her: i will remain mysterious for now

[She shyly admit her wild side.]

Me: Well, now you’re just going to make me want to find out

Her: my evil plan succeeded

[Her accepting my advance and flirting back.]

Me: to lure me into your house and watch ice age 3?

Me: I’m too clever for your tricks

Her: everyone i know is tired of my talking about that movie

Her: so a new audience is always needed

Her: hence the plan

[Her stating that we’re going to meet.]

Me: What area of Boston are you in

[Asking her personal details for logistics.]

Her: over on mission hill

[She invests and tells me, a sign she’s comfortable.]

Her: how bout you?

Me: what’re your roommates going to think about a stranger coming over to watch ice age 3

[Being very forward for the same night meetup. Normally wouldn’t push like that as I knew she would likely be too nervous to invite me right over. But I wanted to show that even if you escalate too far, it often doesn’t matter.]

Her: we’re in the middle of admiring the butts in olympic volleyball

Her: i dont know if we want to interrupt

[She’s hesitating to meet up. I back down to ease off the pressure and switch to being playful.]

Me: female or male butts

Her: is there male volleyball?

Me: not as fun to watch though

Her: do they wear the short shorts?

Me: who wears short shorts?

Me: and yes, yes they do lol

Me: haha yeah, i just struck a chord with u, huh?

[Teasing her on thinking about male’s butts.]

Her: on second thought

Her: guys in short shorts are weird

Her: its a little creepy 80s

Me: damn it, I already started rummaging through my creepy shorts drawer

[Being silly and sarcastic that I have creepy shorts.]

Her: i just did research

Her: i take it back

Me: did you really just make me look at another man’s ass?

Me: you deserve a spanking for that one

Me: IN booty shorts

Her: that’s quite the punishment

Me: mmhmm, I don’t play around!

[Her responding well to my advance and playing back with me.]

Me: okay I have to tame myself before I say bad things

[Continuing to escalate, hinting that I’m thinking about sex with her.]

[She’s turned on and enjoying the advances, tension is high now.]

Me: You’re too adorable you know that

Her: oh god you made me blush

[Her purr made me smile so I told her how I felt. This made her embarrassed in a good way.]

Her: blushes all around

Me: a little bit of rouge for good measure

[Easing the tension with some humor.]

Me: Unfortunately, I have to run for now, some friends are calling me out

Her: you’re pretty awesome, maybe we can do this in person sometime

[Her asking for my number before I even made the move.]

Me: mhmm, we’ll have to watch ice age another time. You free Monday night?

Me: shoot me your number and I’ll text you tomorrow

Me: enjoy your butt watching and ttys!

[Some lightheartedness so she leaves the convo with a smile.]

Alex was floored. He said, “I can’t believe that just happened. I’ve never had a girl talk like that…I didn’t even think it was possible.”

I replied, “The girl saw your profile, your pictures, and what you do for a living. That didn’t stop her from becoming attracted to you, did it?

And you know what? You don’t need to be an asshole, either. I never put her down, I wanted to get to know her better, and I respected her boundaries. But, I was forward, playful, and honest the entire time. The sexual dynamic only further strengthened our emotional connection.”

Don’t think this conversation is limited to online interactions, either. If you want romance with women, you should be flirting in person, through text messages, and on dates.

Be a lover first and a friend second.

I’ve helped dozens of men meet beautiful women through online dating. I’d love to do the same for you. Let’s talk for a free strategy session.