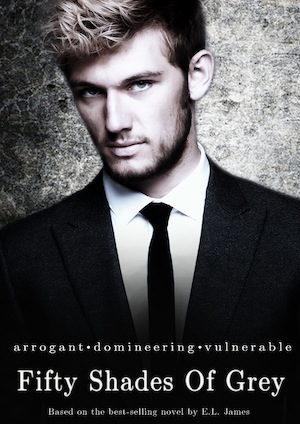 A book about a dominated virgin-turned-sex-fiend is shattering countless records. 50 Shades of Grey is the fastest selling paperback in history and an NC-17 feature film is in the works. Every woman I know has at least skimmed it by now.

Men around the world are furious because of this book and I am, too. Except that I’m not upset in the same way most guys are.

I’m all for women enjoying their raunchiest fantasies. Their sexuality doesn’t threaten me or make me feel insecure. In fact, I think it’s hot that women are openly embracing their desires. We’re all human, and we all want sex.

Nor am I concerned about how “terrible” the writing is. I’m an avid writer and even I understand that you can have a great story without superb literary prowess. If the content is emotionally engaging the reader, then it’s doing something right.

Instead, I’m disappointed with the lead character of Christian Grey. He’s severely troubled, manipulative, and emotionally abusive. He’s a jealous, insecure wreck who tries to control the inexperienced Ana.

I think it’s disgusting. Yet, as much of an asshole he is…I completely see why he turns millions of women on.

He built a passionate, attractive lifestyle.

He’s relentlessly ambitious and eager to share new experiences with his partner. He pursues activities like sailing, kickboxing, travelling, and flying a helicopter. He is a generous philanthropist and loves his family. Did I mention he’s the founder and CEO of a multinational corporation?

I understand that the above is not a realistic goal for many. But you don’t have to be rich to showcase those qualities. You just have to take initiative and want the best for yourself. That attitude is what attracts women.

If you don’t have a job, bust your ass to find one. Network, send out more resumes, and hire a professional resume writer if necessary. If you have a job, do it well and move up the ranks. If you hate your current job, search for one that you enjoy. Yes, I know it’s hard as hell right now but this is the time to make yourself stand out.

Whether or not you’re close with your family, you should have people you care about. That could be blood-related and/or a group of friends. If you don’t have a social circle, start going out with the intention of meeting people. A girl wants to be with a man that can form healthy connections with others

Christian Grey does what it takes to be an attractive man.

He encourages her sexuality.

Many women have grown up feeling insecure about sex and their body. They’ve been told it’s wrong for a woman to be sexual like a man. And they get slut-shamed by both genders if they even try.

Women are dying for men who make them feel that their sexual desires are a good thing. They want to experiment and explore their fantasies without judgment. They want to be able to speak about sex freely.

Christian yearns to know every inch of Ana’s body. He looks to fulfill her sexual needs. He makes her feel safe when they’re alone so she truly expresses what she wants. She knows that she can be her naughtiest self without worry.

He uses sex toys with her. They roleplay as dominant and submissive. They play with bondage, flogging, and spanking. He transforms her from a timid, unsure girl into a sexually confident woman and she loves it.

He desires her without shame.

He doesn’t dance around his intentions with her. He’s not pretending to be a friend. She knows he wants her and he makes it clear often and right from the start. Being desired is what gets women the hottest.

He wants to have sex with her all the time. As the relationship emotionally progresses (even into marriage), he still makes their sexual connection a priority. He understands how important it is for keeping that strong sense of attraction.

He’s not afraid to be forward with her. In public, he builds up sexual tension by touching her under the table and saying stuff like “I can’t wait to get my hands on you later.” He texts and emails her sexy messages throughout the day. He turns her on to the point of sex at parties and in public places.

In turn, she desires him without shame as well. He further reinforces those emotions because…

He has incredible sex.

When it comes to the bedroom, Christian rocks Ana’s world. He pleases and teases her with foreplay until she can’t take it. He makes her beg for him to be inside her. He focuses on her pleasure and ensures she has mind-blowing orgasms.

He plays the dominant role, which the overwhelming majority of women secretly crave. There are obviously exceptions but the stats tell the story. Women get wet when a man leads their sexual experiences.

He talks dirty to her. He describes her body in detail and says exactly what he’s going to do to her. He tells her things like “you are mine” and claims ownership of her in the moment. Then he holds her wrists, pins her down, and takes her. That’s the shit that taps into a woman’s most primal nature.

Clearly, you have to be careful and make sure the girl likes this, too. Ease into it with less intense talk and touches. As long as she’s still into it (smiling, moaning, encouraging you), gradually push forward. After your experiences, ask her what she enjoys and what else she would like you to try.

A passionate sex life is fundamental to a strong, sustainable relationship.

He is vulnerable and grows with her.

While yes at first Christian is closed off, he soon opens himself up to Ana. He lets her into his inner world and communicates his feelings. He doesn’t shut her out of his life because of his own insecurities.

As he bares his soul to her, and vice versa, he grows as a human being. Rather than just complain and hold onto his demons, he strives to move past them. He aims to become a better man for himself, her, and the relationship.

If you expect to have an honest long-term relationship, you can’t hide your flaws. So many men have the wrong idea that vulnerability is a weakness. It takes a confident man to present his true self at all times – and those who fail to do so struggle endlessly.

You are perfectly imperfect like every other person on this planet. Women realize that and will want to be with you as long as you show forward momentum in implementing positive change.

Christian Grey is not an ideal role model for men or women. However, it would be foolish to ignore his good qualities that drive women wild. Rather than blindly hating him out of fear, why not understand what makes him so damn irresistible?

Use 50 Shades of Grey to your advantage.

Want to create powerful sexual connections with women? Talk to me for a free consultation.