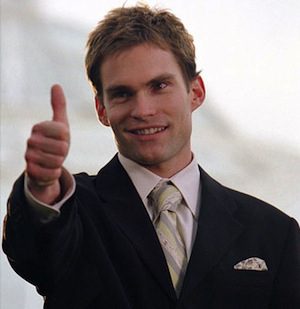 Note: This is part one of two in a two-part series. Part two is here.

After sharing a story on Reddit about my experience with girls as a teenager, I was asked:

“So you’re what they call a natural, huh?”

I sat and thought about that for a while. With this girl in particular, all I did was make a move and things worked out well. In school, I wasn’t part of the popular crowd. I was chubby, dressed like a nerd, and got picked on often. Yet somehow I ended up having more success with women than even the jocks.

After a while, I realized why that was and responded with:

“I never considered myself a natural. It’s more that my drive to want to hook up with girls overpowered my fear of rejection.”

I was fortunate enough to have been raised with a healthy mindset on sexuality. My parents were both born in Europe and never sheltered me from nudity or told me it was wrong. I saw naked women on beaches in Greece, even more nudity on TV commercials there (during my X-Men cartoons!), and watched R-rated films that bared all.

To be honest, I never went through a “girls have cooties” phase. I wrote my first love note in first grade and I even had my first kiss by age 10. For me, sex between two people was beautiful and what normal people did. It was an enjoyable experience for both parties and it was no big deal.

So from a young age, I had a burning passion to have fun with girls. Not just for myself, but to show them an amazing time as well. I fell in love with everything about them – the way they smelled, the way they dressed, and their feminine attitude. I loved everything so much I was willing to risk getting rejected – something I was already used to.

I teased, I poked, and gave suggestive smiles. I dropped innuendos, sat close to girls, and told them they were cute. I took chances and asked for numbers and constantly made plans to hang out after school. I playfully touched them and went for kisses on our “dates.”

Did it always work? Hell no. I had girls turn me down many times. But I hit it off with a lot of them and had incredible experiences because of it.

I was forward, yet non-judgmental about sexuality and it worked better than I’d expected. I started making tons of female friends, women trusted me, and girls opened up more than ever.

That’s when I realized…

Women want to be desired as much as we desire them.

A woman loves knowing that a man wants her. That she’s so irresistible you want to flirt and touch her. That you will take her and give her intense, mind-blowing pleasure. I’ve said it before: women think about sex (a lot), too.

When you hang around girls that you’re attracted to and hide your romantic intentions, you’re admitting those feelings are wrong — that having, normal sexual thoughts are a bad thing. Guys, you’ve got to stop putting women on a pedestal. They’re just like you and they want the same things.

You’re also assuming that women are stupid or naive. Your body language and behavior often give up how you really feel about her anyway. Women possess high emotional intelligence and a sixth sense for knowing when a man is being dishonest.

When you hide your intentions you…

Don’t give me that “I don’t want to disrespect her” excuse. We’re in the internet age and you’ve watched some freaky adult entertainment and thought some ridiculous shit. Guess what, women are into it as well! (Well, most of it.) You won’t have to watch it anymore when you can do it yourself.

Wouldn’t you want to embrace a woman? Make her feel incredible underneath you? To have her call out your name in ecstasy? You have to let that desire motivate you to take action with women. You can either be alone or be with someone. Your call.

Again, women yearn to be desired and being ashamed or afraid of your sexuality only hurts you in the end. Of course, being sexual with women requires self-control, respect, and timing to be successful. Find out the right way in part two…

Need advice on turning women on? Get a free consultation now.