Why You Need to Make a Move or Move On 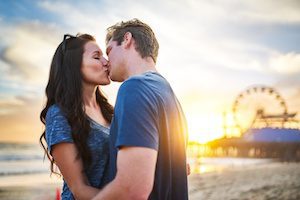 Is there a girl you like that you’re just dying to know if she likes you back? Have you hung out with her time and time again but things are still ambiguous?

Do you rack your brain with never-ending questions such as, “Does she like me?”, “Does she see me as just a friend?”, or “Could she still like me after all this time?”

That uncertainty is a terrible feeling, isn’t it?

You’re not alone. In all my years of work, this may be the most common situation men tell me about.

They’re frustrated and feel stuck in limbo. They get tunnel vision and become obsessed with one girl. They can’t focus on other eligible women.

These men detail their entire history with their romantic interest to me and ask, “Nick, what do I do? How do I find out how she really feels?”

Regardless of their situation, my answer is always the same. I’m here to tell you what I tell them…

It’s time to make a move or move on. Kiss her and see if she’s interested in you — that’s the ONLY solution to your problem.

She already knows how she feels

A lot of men say they’re terrified to make a move because they don’t want to blow their chances. They worry that if they try to kiss a girl and she’s not into it, it’ll ruin everything.

But I’ve said this many times before — most women know whether or not they’re potentially interested in a guy within an hour of meeting them. After that, you going for a kiss won’t change her mind about how she feels towards you. You’re only going to reveal the truth.

And that’s what you’re really scared of…finding out that she may not be interested.

So let’s get this straight, then…

You’d rather fantasize about the amazing relationship you two COULD have instead of actually MAKING IT HAPPEN.

You’d rather hang out with her as friend (even though you don’t want to be her FRIEND.)

You’d rather invest time in a platonic relationship with her and experience it firsthand when she starts dating SOMEONE ELSE (because that someone else actually showed ROMANTIC INTEREST in her.)

All of these end up with you feeling hurt, unfulfilled, and often resentful. When you avoid discovering where she stands you’re not affecting the outcome, you’re only protecting your ego. And by doing this, you’ll never get what you want out of the connection.

Moreover, when you hide your true feelings you’re not being congruent with your intentions. You’re preventing yourself from building genuine self-confidence. You’re not developing the resilience needed to become a stronger individual. You’re sabotaging yourself and subconsciously reinforcing that you can’t attract the women you desire — even if that’s not true.

If a woman’s attracted to you, she’s not going to say “OMG this amazing guy just tried to kiss me….what an asshole! It’s over.” That’s ridiculous.

Even if she likes you but isn’t ready to kiss, she’ll let you know. She’ll say, “I don’t kiss this early.” Or “I still need more time.” Or, she’ll simply turn her cheek. Then you can always try again the next time you’re together.

So stop speculating about how she feels because…

You’re wasting your time trying to read her mind

I’m sure you would love to know exactly how a girl feels before making a move. You want reassurance to know that if you go for a kiss, you’re going to get it. Because if she’s not interested, what’s the point in trying?

That’s why so many guys come to me begging for my analysis of their situations. They send me text convos, detail their date experiences, and try to explain everything about the girl in question.

I’m not a psychic, though. While I do have a decade of experience in the field, I can’t tell you with 100% certainty that a girl is into you. I can make assumptions and good guesses based on data, but it’s not a guarantee.

Even when a woman outright flirts with you, there’s still the possibility that she’s just doing it for attention or isn’t serious about moving forward. Sometimes when a girl is in a bad relationship, she’ll show interest in you but when it comes down to taking action, she’s not ready to start an intimate connection.

For the most part, when a woman likes you, she’s not going to come right out and tell you. Women usually want you to make a move first and when you don’t, you’re only hurting your chances.

As a rule, the longer you wait…the less likely you’re going to become romantic with a girl.

Let’s assume the girl you like likes you, too. She’s investing time and emotion into communicating with you, meeting up, and putting herself out there. She may even be dropping hints that are going over your head.

She’s placing herself in a vulnerable position. Nobody likes being vulnerable for an extended period of time. It’s in our nature to walk away from those situations.

By waiting around for you, there are a few inevitable possibilities that are going to happen. All of them work against you…

And what almost always happens is that she realizes you’ve been too afraid to make a move.

She’s not oblivious that you like her. She knows you’re not texting her and hanging out just to be best friends. So from there, her attraction for you will fade and she’ll stop responding or end up rejecting you.

Every guy knows that women are attracted to confidence and turned off by neediness.

Well, when this woman realizes you’re too scared to make a move, how do you think she’ll feel?

You’re showing her that you’re not confident in yourself. You’re not a leader or a man who goes after what he wants. You’re communicating to her that you’re being dishonest with your intentions and seeking her approval.

Those are the ultimate signs of neediness.

Do you think that’s going to make her want you more or less?

Women respect and desire strong men. They want to feel secure about their choice and know that they’ve got a “catch”.

All you’re going to do is set yourself up as the “backup guy”. She may have liked you at some point, but your inaction turned her off. In her ideal world, she knows you’re not the man she wants.

So either she’s going to leave you for the guy who fulfills her needs in a partner or she’s going to keep you around for attention until that man comes along. The girl doesn’t suddenly become more attracted to you when you’re timid.

In all my years of coaching, I’ve almost never seen a guy wait around for a long time and then get the connection they so badly wanted.

They always end up chasing a girl endlessly, desperately trying to spend time with her. The girl doesn’t respect him and keeps him around on her terms. She cancels on plans, takes days to respond over text, and may kiss him on dates but often won’t have sex with him.

In some circumstances, especially when a woman is older, she may settle for that guy. But she does so out of convenience, not love or attraction. And it’s only a matter of time until she can’t force herself to have sex with him, or she cheats on him, or she ends up leaving him.

So take the damn shot and figure it out

The best approach is to start making moves early with women. If she’s attracted to you, then you got what you wanted. If she’s not, you can focus on other women. Either way, that’s the fastest way to the truth, growth, and more success.

Text her and invite her out. Follow the guidelines here. Again, she’ll make time for you if she’s genuinely interested.

If you’ve tried 2 or 3 times to get her out and she hasn’t committed — leave the ball in her court. She knows you want to meet up and pushing her further will only make things worse.

Now when you’re on the date, follow these 3 steps:

Doing those three things will liberate you from your uncertainty. You’ll find out where things stand between you two. And I promise that regardless of the outcome, this is always the right call.

Now if you’ve finally accepted it’s time to go for a kiss but still struggle to do so, look out for my follow-up article next week. I’m going to share some tips on how anyone can gain the courage to make the bold moves women love.