Why She Stopped Sleeping With You Why has a disappointing sex life with your partner become the norm?

Everywhere I look, people preach that passionless long-term relationships and marriages are inevitable. Women supposedly lose their desires while men are forever frustrated. They claim you have to accept your miserable fate and learn to laugh about it. That isn’t funny to me.

The sad thing is, they’re often right. There are so many couples where both parties feel unfulfilled. And it got me thinking…why is that?

We’re the most plugged-in, knowledgeable generation in history.  We have an unlimited supply of relationship books, dating advice blogs, and marriage counselors. We have all the resources needed to create exciting sexual connections.

So if it’s not a lack of resources, then maybe the resources are wrong. I’ve come to realize the problem is…

No one is speaking honestly. They sugarcoat everything. They don’t have the guts to admit what’s really going on. It’s the fluff perpetuated by society, religion, “relationship experts”, magazines, and dating game shows.

Get ready for the truth but please understand, there’s no going back.

Dispelling the excuses and accepting reality

You and everyone else has a hundred different reasons why you’re not having sex:

Your woman is stressed at work. There’s never enough time in the day. You just need more date nights. Life is hard and tiring. The list goes on and on.

While all of the above may be true, no one is saying the biggest overarching reason:

She’s just not that attracted to you.

She probably was at some point in the past but not currently. Right now you don’t get her turned on to the point where she can’t control herself. You don’t draw the primal, animalistic lust out of her. And she’s not getting wet enough when she’s with you.

This is where a good portion of readers will start flipping out. “You don’t know what the hell you’re talking about Nick!” They will get defensive, panic, and rationalize their lack of sex under the guise of “My partner has a low libido. She has a low sex-drive and doesn’t think about that stuff.”

Barring medical complications (which I’ll discuss later), chances are I’m right. We are born to have sex — it’s part of our biology, just like eating and sleeping. It’s one of our core physiological needs to live happily. And if you still think I’m full of it, consider this…

The biggest mindfuck is when men-in-denial are left by their supposedly frigid women. Girls leave their sexless relationships and suddenly enjoy being sexually liberated. They start hooking up with guys like crazy or end up with a new man that they can’t resist being penetrated by.

You really think your partner doesn’t crave sex anymore? Stop the denial. They just don’t desire you. Now let’s figure out why that happened and what you can do about it.

How did this happen? The mental missteps

The overwhelming majority of women want to be polarized by a masculine, dominant energy. That doesn’t mean she’s weaker or less than you. That doesn’t mean you control her. That means you’re a leader of others, but most importantly, of yourself.

Somewhere along the line she stopped seeing you as that man. And it’s usually about your mental traits rather than your physical ones.

Let’s assume you have a woman that genuinely cares about you and wants to make the relationship work. If that’s not the case, then there’s a larger issue here and you shouldn’t be with her in the first place. So…

Maybe you stopped being assertive. You don’t speak your mind. You’re timid. You don’t go after what you want or want the best for yourself. You have no ambition. You don’t set and enforce your boundaries.

Maybe you lost your confidence. You have low self-esteem. You don’t trust in yourself and never take charge. You’re always negative and cynical. You get jealous easily. You became needy, clingy, dependent, and overbearing.

Maybe you let yourself go. You got lazy. You stopped taking care of your health and your appearance. You don’t dress well. You walk around with weak, unattractive body language that makes you look like a pushover.

Maybe you became an asshole. You close off and don’t communicate your feelings in healthy ways. You’re passive-aggressive. You flip out and yell at her for no reason. You disrespect her. You ignore her. You’re controlling and manipulative. You don’t have fun together or make her laugh.

And the huge one I can almost guarantee…

You stopped expressing your sexuality and you don’t tap into her sexual desires.

How did this happen? The sexual missteps

Inside every woman is a carnal beast wanting to be unleashed. The problem is she’s been raised and told by the world that her sexuality is wrong. That it’s something to be ashamed of. She needs your encouraging leadership to tap into that inner sex goddess.

Again, somewhere along the line she stopped getting to that emotional, sexual place. It could be…

You don’t flirt with her randomly. You don’t sext her anymore or make her feel sexy every day. You don’t initiate sexual contact or naughty talk. You fall into the same boring routine. You’re not spontaneous. You don’t create wild sexual adventures. You don’t talk with her openly about sex. And you don’t indulge her deepest fantasies.

You don’t walk into the room and run your hands all over her body. You don’t take her with passion. You never tease her body until she’s shaking with excitement. You don’t get her moaning uncontrollably and experiencing incredible orgasms.

The research shows that women like to be desired and taken by their man.

“In the lab, women are responding generally to scenarios of sexual assault. …Does that mean that any of us want to go out and be sexually assaulted? No, it doesn’t. The realm of arousal and the realm of fantasy can tell us something about ourselves psychologically.

The feeling of being desired is a very powerful one, a very electrical one. And I think at least at the fantasy level, that sense of being wanted, and being wanted beyond the man’s self-control is also really powerful.”

Unfortunately, you may have even discouraged her sexuality altogether. Men tend to put little effort into stirring their woman’s sexual emotions. They curl up in bed, don’t try to arouse her, and timidly ask for sex. They get frustrated when she doesn’t respond with enthusiasm.

Then they beg. When that doesn’t work, they pout or try to guilt her into it. They automatically expect her to take off her clothes just because she’s their partner. Sex becomes a chore or obligation to the woman. It gets associated with negative feelings rather than something they love and crave to do.

This kind of behavior is pathetic, unfair, and an absolute turnoff.

How to fix things moving forward 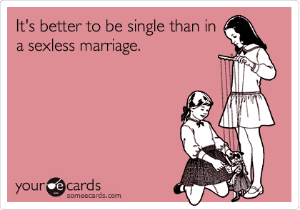 If you want a healthy sex life with your partner, she has to become attracted to you again. Sometimes that’s possible, sometimes it’s not. The only way to find out is by taking action because waiting around won’t change your circumstances.

Sex doesn’t have to get less enjoyable over time. Marriages are not destined to dead bedrooms. And stop believing that women don’t want sex as much as we do.

Find the right woman and be an irresistible man.

Want my personal 1-on-1 help to implement what you’ve just learned? I don’t want you to feel like you have to do this alone. If you’d like a step-by-step, tailored approach to magnetically attract women and build more meaningful relationships, let’s have a free, 100% confidential consultation call (up to 30 minutes) to discuss how we can work together.  Schedule your free strategy session here.