10 Mistakes That Make You Look Desperate

During the early stages of dating, a girl doesn’t want to feel that you’re way more invested than she is.

She wants you to be secure, not clingy. She wants you to see her as a person, not idealize her. And she wants to know you are choosing her — and not just because you’re desperate for a girlfriend.

Now I’ve written before about how neediness is a state of mind and not necessarily your actions. Anything you do can be needy or not needy.

But I would be naive to think that some behaviors didn’t still look “desperate”, even if they’re coming from a healthy place.

1. Writing longer messages than hers

Listen, I hate playing games. If I like someone, I’m going to talk to them and not overthink it. But I also understand that smothering a girl too soon can be a huge turnoff.

Just remember to keep your text conversations at the same length or less than hers. Otherwise, it can be overwhelming as she thinks, “He seems way too serious already. It also makes her feel like she needs to reply more when texting is supposed to be light and fun.

2. Double texting when you don’t hear a response

So you sent a girl a message and now you keep checking your phone. 15 minutes go by, then half an hour, and then an hour. Now you’re panicking and wondering if she’s ignoring you. You’re dying for a response because you just have to find out for sure.

So you decide to send her another message. This is the dreaded “double text”.

Just relax. Maybe she just got caught up at work. Maybe she’s hanging with friends or family. Maybe she’s been busy taking a shower and getting ready.

Whatever the reason, it can come across intense for you to follow up when you didn’t get an immediate reply. And if she was ignoring you, messaging her again isn’t going to get her more attracted to you — it’ll do the opposite.

If you don’t hear back, text her in a day or two.

3. Asking if she got your last message or confronting her about not responding

Just like “double texting”, never ask a girl if she got your last message. Assume she did and that she hasn’t responded for a reason. That reason isn’t always negative and pestering her about replying shows you’re just waiting around staring at your phone.

Sometimes guys will “joke” about a girl ignoring them or being a flake. You say stuff like, “You’re a really busy girl, huh?”

You can claim you were just kidding, but the truth is that it’s usually coming from a place of insecurity or frustration. You feel that desperate need to get a response out of her. This is a great way to make a girl feel like you’re an angry, passive-aggressive guy. 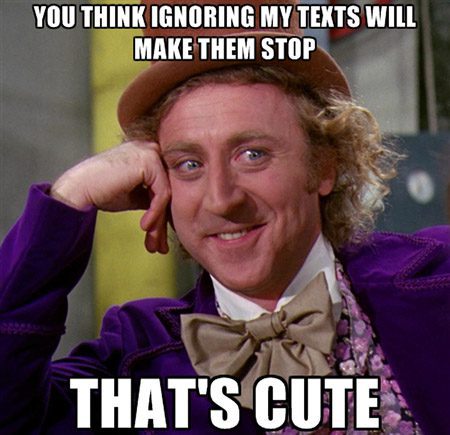 4. Showering her with gifts before you’ve gotten to know her

You can’t buy a girl’s affection. You may buy her attention as a provider but you’re not creating genuine attraction. You alone are more than enough to build a romantic connection with a woman.

Maybe you think showing her what you can offer will give you a better chance…but all you do is set yourself up as a guy who needs to compensate to get women. You might end up with a woman, but she’ll only be attracted to your financials.

Many women also feel pressured or manipulated by a guy who buys them things. They feel like like it’s a tactic to have them indebted to a man — which is often true.

If you want to buy a girl gifts, make sure she’s in a romantic relationship with you first. By then, she’s invested in you and it’s fine to show your girlfriend you appreciate her.

5. Professing your feelings outright without flirting or creating attraction

This happens if you’re a “nice guy” and stuck in the friend zone. You’re afraid to flirt, create physical contact, or move things forward with the girl you like.

Instead, you pretend to be an amazing friend. You believe that if you just hang around for a while, you’ll build a romantic connection. And when that romance never happens, you resort to an outright declaration of love.

You tell her that you like her and care so much about her. You promise you’ll treat her better than any other guy. You try to convince her that you’re perfect for her.

What you’re missing is that attraction is an emotion a woman must feel through your fun, bold, and sexual intentions. Basically, flirting is what turns a girl on.

One of two things happen after your declaration: the girl lets you down gently, often saying, “I don’t want to ruin our friendship.” Or, more rarely, a girl agrees to try it out because she knows you’re polite and really do care about her. Within days or weeks, she realizes she still doesn’t feel that sexual attraction and breaks things off.

This one is particularly challenging for some guys and if that’s you, I don’t want you to feel like you have to do this alone. If you’d like a step-by-step, tailored approach to magnetically attract women and build more meaningful relationships, let’s have a free, 100% confidential consultation call (up to 30 minutes) to discuss how we can work together.  Schedule your free strategy session here.

6. Showing up at her work or home unannounced

Yes, it’s charming in the movies, but in real life, it’s mostly terrifying. And really creepy.

A lot of guys do this to force a woman to have an interaction with them. You then put her in a position where she has to talk to you even if it’s not convenient.

Women take their jobs seriously, too, and they don’t want their managers to see them fraternizing on company time. You’re just going to make her uncomfortable or pissed off.

If you can’t get a woman to respond or accept seeing you with a simple, “Hey, I’ll swing by your place today and say hi.” then you shouldn’t show up. But it’s still almost always better to set up a date outside of her work environment.

7. Being available for her at any time

Whenever you’re making plans with a girl, suggest a single day to hang out. If she can’t hang out then, she can let you know a better day or you can tell her a different time that works for you.

You never want to say, “I’m free whenever, just let me know.” or “I’m open Monday, Tuesday, Friday, and the weekend.” You’re not being concrete enough and you won’t get her to commit to a specific day with you.

More importantly, a quality guy with a great lifestyle values his time and is busy. He’s working, working out, exploring his hobbies, hanging with friends, and even dating other women. He’s not going to completely clear his schedule to see one girl he’s not fully invested in yet. She has to put in some effort to make time or find a day that’s good for both of you.

If you really have all that free time, then you should work on becoming a man that women chase.

Sometimes we get ahead of ourselves when we like a girl and it’s going well. We feel that attraction and already start planning out our future together.

You start looking at concert tickets for two months away. Or you plan a cool weekend getaway. You’re all excited to tell her about these new ideas because you think it’s sweet.

When you tell her, you don’t get the response you like. She seems hesitant. She says she’ll have to think about it or she doesn’t know her schedule yet. Sometimes, she may even agree to it and then back out later.

It’s because you tried to force a deeper connection. She’s enjoying her initial dates with you and being in the moment. She hasn’t even thought that far ahead. The fact that you’re planning a summer vacation together when it’s still March is intimidating.

It’s the same thing with….

9. Talking about an exclusive relationship way too soon

Guys will have a couple of good dates with a girl and think it’s a done deal. They’re sold on her and want to ensure she’s as committed as they are. They also want to make sure she stops seeing other men.

The problem is that most women aren’t sure if they want to be exclusive with a guy until after several dates. And usually, until after sex.  If you pressure her to decide before then, she may see her only option as breaking things off.

It’s basic psychology — the more we invest time or emotion into something, the more attached we become. And sex is one of the most emotional and vulnerable acts a woman can engage in.

There’s no need to discuss an exclusive relationship immediately unless she addresses it first. Have a handful of dates, hook up, and if you’re still feeling the connection — then you can have the “relationship talk”.

10. Asking her if she’s seeing other guys or what she does with them

Before you become exclusive, it’s normal for both parties to still see other people. If she wants to see other guys, you can’t force her not to.

Needing to know anything and everything she does with other guys makes you come across as insecure, controlling, and jealous. She’ll start to think, “If he’s already like this, how much worse would it be when we’re actually together?”

Remember, she’s not your possession and you don’t own her. What she does with her romantic life is private — she can share it with you on her own if she decides to.

The tighter your grasp, the sooner she’ll want to escape it.

Want my personal 1-on-1 help to implement what you’ve just learned? I work with guys just like you to magnetically attract women, increase their confidence, and become the man girls really want.

Click here to learn more about what I can do for you.