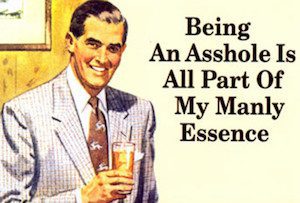 Everyone’s looking for a quick fix that’ll get them more dates. What’s the point of investing time and effort when you can just take a shortcut?

A lot of men who struggle to connect with women get frustrated and look for the easy way out. They eventually have a Eureka! moment like…

“Hey, I should just be an asshole all the time!”

I mean, I see how it kind of makes sense from their point of view.

In college, cocky frat guys get laid like rock stars. Go to a bar and you often see the loudest, most obnoxious guy making out with girls by the end of the night. And everyone has a friend who treats women like total crap but always has someone to go home with.

They assume that their own lack of success is due to them being too nice. So they think they just have to stop caring about girls they meet. They need to treat them as sexual conquests and nothing more. They have to put them down, ignore them, and make them jealous by sleeping with other women.

Basically, they must become an arrogant narcissist. If they do that, all their problems with women will be solved.

Being an asshole can get you laid but it’s usually not because you’re an asshole. It’s more about the other qualities that those assholes also often embody.

Those men tend to be self-confident, assertive, outspoken, willing to set their boundaries, playful, flirtatious, and sexual. All these traits have nothing to do with being an asshole; many good-hearted men share them as well.

The truth is that other guys struggle because they don’t put work into making themselves more attractive. They often feel entitled to women just because they’re a nice guy or a good friend. It’s not that they’re too caring, it’s because you act desperate, timid, and like a pushover.

When that doesn’t work, they become resentful and try to compensate using the “quick fix – just be a dick” route. What they don’t realize is that this comes at a great cost which just isn’t worth it. Here’s why:

Do you like drama? Do you love being lied to, emotionally manipulated, and just plain disrespected?

I didn’t think so.

But if you’re rude, condescending, and emotionally aloof – don’t be surprised when you attract similar women. We are drawn to people who share the same values. Like attracts like.

If you’re just looking for flings, you might not think this matters. Who cares if you hook up with a crazy girl for the short term?

Trust me, you’ll care when she flips out every time you want to see your friends. Or she slashes your tires. Or gives you a pregnancy scare. Or even when she threatens you with false rape charges.
Yes, I have personally known men who have dealt with all those issues. It can seriously mess up your life.

Individuals with high self-esteem are happy with who they are. Therefore, they don’t find it endearing to be around toxic, disrespectful people. Why would they? They have too much self-worth to put up with that just to feel “liked” by someone.

People who chase others that treat them poorly are insecure. They seek approval from assholes because they don’t truly respect or love themselves. These are not the women you’re looking for, especially if you want a healthy relationship at some point. 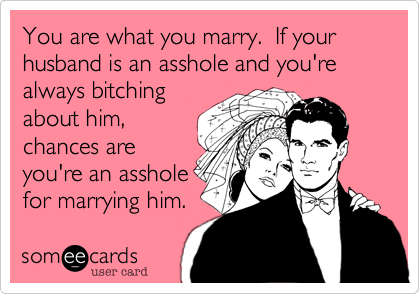 Maybe you get lucky, attract a hot girl, and end up in a relationship. When you’re an asshole, one of three things usually happens:

You become disconnected from other people

So when you’re mainly connecting with low-quality women, you get a narrow view of who’s out there. You believe that’s what all women like and they all love shitty behavior.

You expect the worst in women. You see them as less. You don’t trust them and you’re always on the defensive. You have a hard time opening up to anyone which causes you to build weak connections.

That’s why you see guys from communities like The Red Pill believe women are shallow. They think women are cold-hearted cheaters who use men and only respond to “alpha male douchebags”. When in reality, they just encounter more of those women because of the type of people they are themselves.

Every time I meet someone who’s angry at the world, they always talk about how horrible everyone else is. They treat people poorly, receive the same in return, and prove themselves right.

You start to hate yourself and the life you built

Being an asshole that’s surrounded by assholes feels miserable. Take it from a guy who used to be one himself. I was controlling, jealous, and a guilt-tripper.

All of my relationships were thin. There was no respect. No trust. No true love. Just a whole lot emotional turmoil and pain. Everything felt hollow. I loathed myself for the way I acted towards others and I resented people for doing the same to me.

How you treat others is always a reflection of how you feel about yourself. When you’re happy with who you are, you have no desire to see others suffer. Instead, you want to build people up and watch them succeed, too.

And if you’re just being a jerk as a tactic to attract women, it’s not sustainable or fulfilling. You’ll feel like shit after a while because of what you’ve become. One day you’ll want a healthy relationship with love, compassion, and honesty.

Only people who lack empathy or are sociopaths can lead a life without those things.

Years ago, I had a life-altering experience in which I realized I was an asshole. It was a profound moment that took me on an ongoing journey to become a better, stronger person.

I stopped being fake with people. I opened up and learned to be vulnerable. I gained control of my emotions. And because of it, everything in my world has changed. I’ve made incredible friendships, learned to maintain healthy romantic relationships, and overcame depression.

Most importantly, I discovered how to love myself. Becoming a decent human is the best thing I ever did.

Some things in life aren’t meant for shortcuts. There is no easy solution to successful relationships and personal growth — they are a life-long journey.

If you want to become a great man who has great people around him, you have to put the work in. It may not seem like it from the outside but assholes always lose out in the end.