Only Jerks Talk to Girls 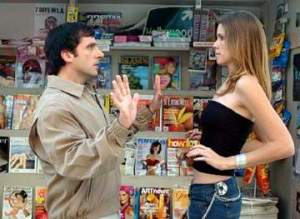 Very few things get under my skin nowadays. However, it bugs me to hear guys complain about how approaching a new woman automatically makes you a dbag. Why is it rude to say hi to a girl at Whole Foods? What makes you think you can’t do it with class? You can be a gentleman and still meet women anywhere and everywhere.

The men who are too good to “stoop that low” are just protecting themselves. They’re too afraid to face their fears and go out on a limb. Putting yourself out there makes you vulnerable to feeling stupid, hurt, and rejected. Steve Carell’s reasoning from The 40 Year Old Virgin sums it up perfectly:

“You know what? I respect women! I love women! I respect them so much that I completely stay away from them!”

When I try to convince these guys that it’s okay to introduce yourself, they respond with “But a lot of women want to be left alone.” I can’t argue with that because sometimes it’s true. All of us need our space and aren’t always in the mood to talk to someone. But as long as you don’t go up to her saying, “Hey baby, you’re looking so sexy, I want that fine ass right now!” you’re not overstepping your boundaries. A friendly greeting isn’t harassing or threatening.

Women who aren’t interested make it clear quickly. They’ll tell you that they’re busy, have a boyfriend, have to leave, or cue you in with their body language. If she gets quiet, turns away, looks uncomfortable, or is obviously not into it, you can easily say “Hey, it was nice meeting you. Gotta run.”

The beauty is that you will find girls who are interested, very interested. Girls who would love for an awesome guy to come by and dazzle them. I’ve seen it so many times: the girl doing her daily routine, looking bored, only to instantly light up when the guy next to her in line says hi. Tons of women are waiting for a chance like that — it’s the stuff romantic comedies are made of.

Want to start meeting more women? Hit me up.