8 Misconceptions of the “Alpha Male”

Especially in self-improvement and pickup circles, men love to preach about what “class” of male you should be. If you’re an alpha male, you are the leader of the pack and get all the women. If you’re a beta male, you are a loser push-over that no one will ever love.

It’s all nonsense and the classification is extremely harmful. Men become so obsessed with this idea that they base every action on whether or not they are being “alpha”. They enjoy laughing at weak beta males and feel superior because of it.

What’s funny is that I’ve noticed the men who are most vocal about this are usually the most insecure. They have no idea what it means to be genuinely confident. They use arrogance as a way to protect themselves from having real connections with people. They need to prove themselves as true men by overcompensating. You can almost hear them screaming “Look everybody, I am an alpha male! Hear me roar!”

I’m here to disprove what many people believe makes an “alpha male” and show you what it means to be a real, confident human being.

1. You’re not supposed to feel any “sissy” emotions.

Alpha males claim that you shouldn’t feel fear, anxiety, sadness, loneliness, shame, or self-doubt. If you do, you’re supposed to ignore, avoid, and shove those emotions away. ALPHA ALL THE TIME.

Sorry, but these are normal human emotions that everyone experiences. Without them, you will struggle with empathy and relating to others. The key is to not bury these emotions but to learn how to manage and accept them. Trying to escape them only intensifies their control over you.

Yes, your day-to-day life and outlook should not be ruled by these emotions. But you will feel them at some point and that’s perfectly okay. Remind yourself that it is normal, temporary, and does not dictate your overall character. Have the courage to work through them and challenge your comfort zone. Action will lead to further confidence.

2. Attraction is everything when meeting women.

When men get into dating advice they think that you have to “game” women constantly. If you let up with your flirting, teasing, sexual innuendo, sarcasm, cockiness, or physical contact for even a second she’s going to walk away. They believe that you always need to demonstrate your value and spike attraction to be a ladies man.

Him: “Where are you from missy?”

Her: “Minnesota originally, but after college I decided to stay here since I loved it so much.”

Him: “Oh wow so that’s why you talk funny. Let me guess, you studied farming.” *rolls eyes*

Her: “No, I studied creative writing.”

Him: “Haha, sorry but you’re not the next Shakespeare. You should have chosen a profession where you can actually make money.” *nudges her shoulder*

Her: “Right…I love what I do and I’m happy about my decision.”

Him: “Well, money makes the world go around honey. Let’s see if you still live in this fantasy five years from now.” *throws arm around her after he’s already torn her down repeatedly*

You become a clown who can’t make a legitimate connection. Your need to act like a tool frustrates women and shows your insecurity. Listen, I’m all for being sexually assertive and forward from the start. But it should be sprinkled in naturally during conversation rather than with everything you do.

If you need help, use the 80/20 rule as an initial guideline. 80% of your talking will be getting to know each other, relating, and sharing passions. 20% will be flirting, touching, and being playful. Those ratios will change when escalating to more intimate moments.

The combination of actually having good conversation and turning her on is the ultimate seduction.

3. You must be in control at all times.

If you’re not leading every discussion or making every decision, you are considered weak. These insecure men require a constant feeling of control or else they feel powerless. When they aren’t the center of attention, they begin to doubt themselves. They need that validation.

Of course leading, being decisive, and asserting yourself is attractive and important. It demonstrates that you trust who you are to the core. But a confident man also knows when to let other people shine and doesn’t feel threatened by it. He predominantly leads in his relationships but values the voice of the woman he’s with.

Ultimately, he is the one who decides to take control or relinquish it. He does this not out of fear but out of self-assurance.

4. Showing disinterest in women makes you a “catch”. 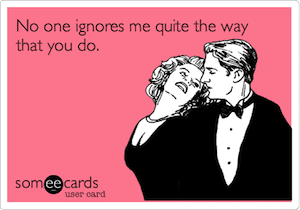 Guys swear you have to pretend you’re not interested or she’s going to think you’re a low-value man with no options. Some even suggest acting a little rude and disengaged from the discussion. The idea of faking how you feel goes against what makes a confident man: vulnerability. That is being unashamed and unafraid to express who you are and what you want.

But, I can’t deny it works on some women. There are girls who will eat it up when a man plays games and acts like he couldn’t give a crap about her presence. They are often insecure, enjoy drama, and will beg for validation. Personally, I like a quality woman who has a healthy sense of self-worth.

Nothing takes more courage than a man looking a woman in her eyes and saying “I want to get to know you better.” It shows you know what you desire and aren’t afraid to go after it in life. If you constantly chase girls who play games, they’re always going to play games with you.

5. You shouldn’t care what anyone else thinks, ever.

The theory behind this is that your happiness should stem from how you perceive yourself and not how others perceive you. While I agree wholeheartedly, some men take this to an extreme and refuse to hear or value outside opinions. Their egos are so fragile that they can’t listen to honest criticism without getting defensive.

It’s one thing to live your life trying to please everyone else or endlessly seek approval. That leads to misery and is a classic symptom of nice guy syndrome. But utilizing constructive feedback to better yourself and improve your own life is how smart men grow.

Listen, take what you feel is beneficial to you, and apply accordingly. You can trust in yourself without drowning out the voices of others.

6. You have to sleep with lots of women.

It’s amazing how “alpha males” claim you should never need external validation, but then base their entire self-worth on getting laid. And if you’re a guy who doesn’t sleep with dozens of women then obviously you’re pitiful.

I’m a dating coach and a big part of my business is helping men become intimate with women. I think for many guys dating around before settling is critical in understanding what they want and how to be a better partner overall. But, there is no absolute number of women you must have sex with — it all depends on what you’re looking for. If that’s a lot of sex with different women that’s cool, but it’s not a necessity.

I know plenty of confident guys who couldn’t care less about casual hookups. A lot of them are experienced but are now looking for a quality woman. They set high standards for themselves (not as a defense mechanism), have a mindset of abundance, and turn down girls regularly. They don’t want to sleep with girls that they don’t see as long-term potential. They hold out for more than looks and commit when they find a high-caliber woman.

For some, empty hook-ups can actually be destructive. I recently worked with a guy who’s been with a Sports Illustrated model and has beautiful girls hitting on him weekly. Yet he’s gotten to the point where these flings make him feel more unfulfilled and lonely. All he wants is someone that he really connects with.

I guess personal happiness, accomplishing major life goals, succeeding in your career, creating an exciting lifestyle, giving value to this world, being a good father, and having healthy relationships don’t mean anything? To many men, the only thing that matters in this world is counting how many vaginas you’ve entered.

Give me a break. That is a sad, narrow way to look at life.

7. Real connections are for relationships, not casual hookups.

After my post last week, I got many responses from guys who were furious. They couldn’t believe that I suggested you should be vulnerable and make an actual connection with women you have casual sex with. That’s exactly what I’m suggesting.

I’m not telling you to be a wimp, pour your heart out, or fall in love if you want a fling. But it also shouldn’t be a cold, detached business exchange. There should be something about her besides her vagina, even as tiny as how down-to-earth she is, that makes you want to share an intimate moment. You are penetrating her body, after all.

Men who can’t make any connection for one-night-stands often have problems with vulnerability, misogyny, or lack empathy. They close off their emotions because they’re afraid of being hurt or judged. They’re resentful towards women and use sex as a way to get revenge and feel empowered. Or they just don’t give a shit about other human beings.

I’ve had casual sex partners tell me that they felt closer to me in one night than with guys they’ve dated for years. I was upfront about the no-strings-attached sex and they were completely cool with it. We had great conversation, I gave a shit who they were, we got to know each other better, and then we had amazing sex.

There a lot of other benefits from all this, too. Emotional connections lead to hotter and more passionate sex. You are fulfilled with no regrets because it was a positive experience for both of you. You reinforce healthy views on women rather than doing it out of spite. And it leaves the girl better off rather than making her feel used.

8. You can never show weakness.

Everything you do must be awesome and nothing less. I remember talking to some guys years back and sharing that I played drums on the side. I explained how famous rock drummers inspired me and even though I was a beginner, it was incredibly fun. Right away the guys cut in:

“Dude…don’t ever say you’re not the best at something. Always tell people that you are incredible at everything you do. Girls will think you’re a washed-up beta otherwise.”

Really? If you’re constantly self-deprecating and see your areas for improvement as negatives, that’s unhealthy. However, there’s nothing wrong with being honest and viewing them as challenges which make you a stronger man. Men who can’t openly admit their flaws in a positive way will never become their best selves.

You want to know how to be a real man? Stop focusing on the title of “alpha male” and instead learn to love who you are through and through. Manage your own emotions, behaviors, and boundaries. Express yourself to others shamelessly. Prioritize your needs and happiness.

You think truly confident men sit around worrying if they’re being alpha enough?