Are You as Honest as You Think You Are? The other day, a friend was telling me about some of his wild romantic experiences. A few minutes later, he turned to me and said, “Actually, I’ve got to get something off my chest. Those crazy same-night sex stories I told you about…it only happened once.”

That shocked me. How many guys downplay their sexual ability…especially to other guys?

I told him I appreciated him telling me the truth. He replied, “Yeah, this year I decided to commit to being authentic in every part of my life. It’s helped me build better friendships, repair bad relationships, and love myself more than ever before.”

When we think about being an honest person, we focus on not bullshitting people. While that’s important, a commitment to authenticity goes much deeper than that.

It’s not only about speaking the truth to others, but being true to ourselves.

It’s about owning our feelings and intentions. It’s about embracing our values, wants, and desires. It’s about making healthy connections with the right people. It’s about accepting who we are and who we aren’t.

And authenticity is a daily, conscious practice until it becomes a way of life. It takes trial, error, and self-discovery.

But why should you care? What’s in it for you?

This is actually more for your benefit than anyone else. You are the only person who can answer the question, “What do I want and need in life?”

So the more connected you are to yourself — the more fulfilled and happy you’ll feel.

Prioritizing and embracing the real you means seeing yourself as worthy. And that is the literal definition of having high self-esteem, which is an insanely attractive quality in itself.

Going against your core leads to frustration, self-loathing, and a constant lack of satisfaction. So let’s commit to being honest together. That means…

So I ask you…are you as honest as you think you are? If not, listen to the words of Dr. Bennet Omalu and… 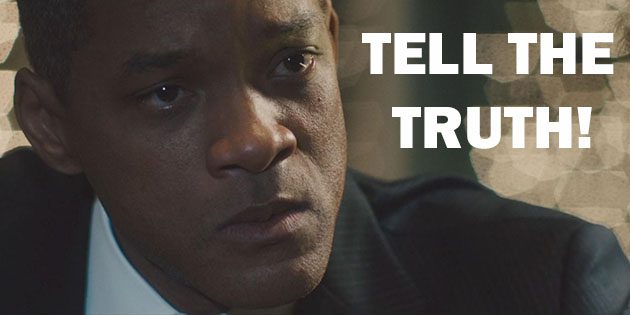