The Sherlock Holmes Method to Always Having Something to Say 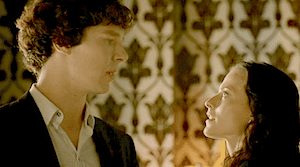 BBC’s Sherlock is Mr. Holmes done brilliantly. While watching the first episode, I thought about how perceptive he is and how that influences his conversations.

Sherlock is never at a loss for words because he has so much content to work from. When guys tell me they struggle with talking to women, it’s usually since they’re not paying enough attention. Instead, they’re listening to their own inner voice and missing out on crucial details. You need to become fully immersed in your environment.

What I love most about Sherlock is that his “science of deduction” and keen observational skills are learnable. While you won’t be able to match his fictional expertise, you can greatly improve your own abilities with regular practice.

Listening is at the core of good conversation and Sherlock is an incredible listener. The second he enters a room, he uses all his senses to take in every detail. He could walk into a venue and notice subtleties about a woman like…

As he walks towards her he recognizes…

Then he approaches to introduce himself. She replies and he notices that…

As they start talking, he is listening intently to her responses. He picks out individual words or concepts in her sentence. He then uses those as “hook points” to fuel his next statements or questions. He even pays attention to which topics are getting her passionate so that he can delve deeper and more personal.

You have to understand that effective listening is much more than hearing spoken words at face value. It is visual, it is audible, it is subtext, it is emotion, it is how something is said, and so on.

When meeting women, I want you to be as observant as possible before and during your interactions. Think outside the box:

I know this may seem overwhelming at first but it won’t be. When you shut up and listen well, you will always have something to say. You won’t stress over what to talk about next and put pressure on yourself. You can relax and the words will come to you naturally.

A good rule of thumb is that if you can’t even remember her name, you are not listening well.

2. Recognize and pick your hook points

Now that you’ve listened and observed for “hook points”, let’s narrow them down. Always focus on one idea at a time…but how do you choose? Ask yourself:

What do I want to talk about? What would I care to learn about her? What interests me?

A huge problem guys have with women is they don’t talk about subjects that engage them. They ask lame questions. They stay on discussions that don’t inspire them. They stick to safe and boring. Or, they micromanage their words based on what they think she will want to hear or discuss.

All of that comes off inauthentic and girls feel it. It also leads to generic conversations that are forgettable. You won’t get much laughter or create any sexual tension, either.

Choose a hook point that you actually care about. They come in one of two forms:

These are words or concepts from her responses.

For example she says, “My roommate and I just drove back from seeing Dave Matthews Band in Virginia Beach. I’m dreading the paper I have to do tomorrow…” Potential hook points are:

These are non-spoken observations you have seen, heard, smelled, or felt. From the Sherlock example, we can deduce some of the following:

3. Relate back through honesty

Using the hook point we chose above, we need to relate with her or ask genuine questions. Consider:

4. Put it into action

Speak from the heart and dig deep. The more you align with your real self, the more natural this will become.

Me: “I went with a friend to a Dave Matthews show at Fenway. I don’t listen to them normally but damn do they put on an awesome live show.”

Me: “Sounds like an epic road trip. You Dave Matthews fans are serious business, huh?” *teasing her*

Me: “Tell me about it…how are you going to get it done when you’ll be texting me all day?” (on writing her paper)

Me: “You know what they say about left-handed people? Brilliant, creative, but absolutely nuts.”

Me: “I had to come introduce myself, us lefties have to stick together ya know.” *playfully*

Me: “I don’t know how you can stand in those things all night.” (on her high heels)
Her: “I can’t wait to get home and just rip them off.”
Me: “Neither can I…wait did I just say that out loud?” *smirking*
Her: “Wow…you’re bad” *shoving playfully*
Me: “You have no idea…”

Me: “A wrist tattoo is a bold statement. Do you have any others I should know about?” *raising an eyebrow*

Me: “I know this is personal but I have to ask…what’s in the locket? Please don’t say it’s a picture of your cat.”

Me: “Awww, I think you’re secretly starting to like me!”
Her: “Really, what makes you so sure?”
Me: “It’s all in the details. You haven’t stop smiling for the last five minutes and we’ve drifted further and further away from your friends.”

For additional examples, here are some recent encounters I’ve had…

I didn’t improve my wit or learn how to talk in various situations overnight. I made a conscious effort to improve my Sherlock skills every day and you should, too.

Observe others and study the unique details about them until it becomes a habit. Soon, you’ll link your hook points together to make smooth, honest conversation.

What tips have helped you talk to women? Comment below!