4 Signs You’re Being a Judgmental Hypocrite It’s so easy to judge someone and put a label on them.

We’ve always been taught there are two types of people: the good and the bad. The heroes and the villains.

I feel like so much conflict in the world right now is due to dismissing others based on singular facts. They claim to understand someone’s entire character based on one thing they learned about them. They then put that person in a box that’s near impossible to escape.

This is especially true for public figures. Even when they do something privately, they’re judged by unattainable standards.

The best way to keep our unfair judgments in check is to recognize our own hypocrisy. We don’t know someone else’s life story and we’re not perfect, either.

Because I guarantee whatever you’re judging people for, you or those you care about have done the same…or worse.

Think this doesn’t apply to you? Let’s see.

Some anti-porn communities demonize all erotica when it’s just a moderation issue for most people.

I also see a whole lot of judgment thrown around about WHAT turns other people on. In particular, how women view men’s sexual fantasies.

In fact, it’s estimated that over 50% of women have some sort of forced sex fantasy and it may be the most prevalent fantasy for women overall. Women also love the idea of being watched by strangers during sex.

We all have fetishes that border on weird and disturbing at times. But that’s completely normal and that’s why they’re fantasies.

Next time you’re going to judge someone’s kinks, imagine they could take a look at your entire life’s browsing history — even when you’ve used incognito mode. What skeletons would they find? 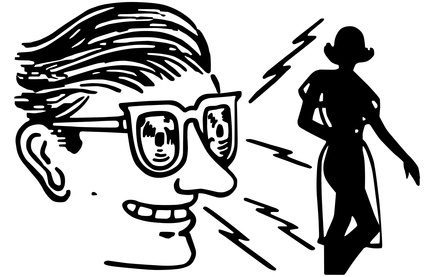 A typical situation: guy sees attractive girl walking by, looks her up and down, and any witnesses to this occurrence put him in the “creep” category.

In this scenario, men are the ones often being judged by women. Checking out a girl in public (especially when you’re in a relationship) is treated like an unforgivable offense. There are even countless articles online about how to get your man to stop checking out other women.

Yet women ogle other women all the time — even more than they ogle other men. 80% of women even say they scope out other women at their most revealing while on the beach.

And I can’t tell you how many times I’ve heard groups of women talking about some random guy’s butt. (It’s usually the butt, too.) Here’s a social experiment with many women openly admitting they check out guys.

Now I get it: there’s a threshold. If a guy’s staring down a woman for longer than 5 seconds, it can be both intimidating and frightening. But a quick glance is really not a big deal.

So unless your guy is constantly eyeing every passing woman, this is a waste time of time. You aren’t going to change biology — men are more visually stimulated than women. This isn’t a sexist justification, it’s backed by scientific research.

I think why people tend to get upset about this is the belief that checking someone out means you’re objectifying them. To a degree, it does.

But when we see anything beautiful. we objectify it. Whether that’s a piece of art, architecture, or another human being. We become stunned at what it physically represents but that doesn’t mean we tie negative value to it. Or that we can’t also see it for it’s deeper worth.

The disconnect around people judging others for drugs while using themselves may be the biggest of all.

Many people see drug users as low-quality, sketchy losers. The easy target has always been cannabis – which, thankfully, is starting to change (at least in the US). Marijuana smokers endure constant judgment even though cannabis has never had a direct clinical death and has no chemically addictive substances.

Maybe you’re thinking, “Well, I don’t do drugs!” Nah, there’s a good chance you do. It’s just that the world has taught you that certain ones aren’t considered drugs. Or that if a doctor prescribes them it somehow makes them less “bad”.

86% of people have drank alcohol with 70.1% saying they’ve drank in the last year. Guess what? Alcohol is a drug…one of the most harmful with 88,000 people dying each year. That places it at the fourth leading preventable cause of death.

It has some of the highest rates of addiction with 12% of adults having been dependent on it in their lifetime. It’s also one of the easiest to overdose with.

What if you don’t drink?

Have you ever smoked cigarettes or vaped? That lightheaded buzz you get is still a drug escape. 1 in 10 Americans vape now.

Have you used Adderall to study or focus? That’s a form of amphetamine just like meth and is highly addictive. Parents get their kids hooked on these without batting an eye even when they may not need them.

What about anti-depressants? They are the third most taken medicine, with 8-10% of Americans using them. As effective as they are for many people, they have massive side-effects that can seriously affect the quality of life. They also can increase suicidal thoughts in vulnerable people.

Finally, are you or have you been on pain medication? I’m talking about stuff like hydrocodone, percocet, and oxycontin. They give out roughly 259 million prescriptions annually in the US for pain medications. The number of prescriptions have nearly quadrupled in the last 15 years or so while pain rates have stayed the same.

These are opioids…just like heroin. They have high rates of addiction, dependence, and kill 52,000 people annually.

The western world (and America especially) are a bunch of drug users. I’d wager over 90% of you who judge others are drugs users yourself or have been. If you are one of the few rare ones who aren’t, almost everyone else you know or admire is.

You’re grossed out by gay guys 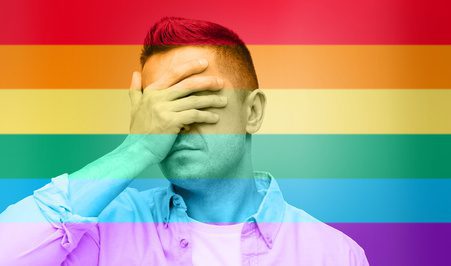 We have made huge strides in LGBTQ acceptance.

But I still see a lot of room for improvement. For example, with men who hate other gay men. This is true in socially conservative areas, certain sects of religion, and hip-hop culture.

Rap has slowly been evolving its views (thanks Frank Ocean, Kid Cudi, Macklemore, and others.

I just find it funny because there’s a little bit of gay everywhere. You can’t avoid it and you’re going to have to start hating a lot of people.

That’s not even taking in the sliding scales of sexual attraction. There are men who are heterosexual but have had random passing thoughts, just find the idea of man’s physique sexually attractive at times, or have experimented to realize it was or wasn’t for them.

Here’s the real kicker, though…

I feel like it’s not absurd to say 1 out of 10 men you encounter have had some sort of gay feeling, thought, or experience that would make haters uncomfortable.

I’m not going to be cliché here but…

Take a good look in the mirror and realize that your shit stinks, too. We’re all in the same boat. Stop picking the low-hanging fruit by judging people and go eat a slice of that humble pie instead.

Because as a rule of thumb, you can’t judge a book by its cover. There’s always more than meets the eye.

Damn, I dropped the ball on the whole cliché thing. I’m guess I’m one big hypocrite, too.