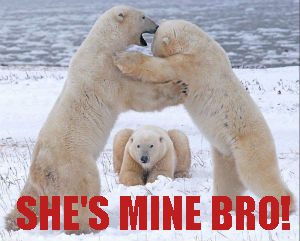 No, I’m not referring to a new version of the infamous viral video. I’m talking about the protocol when you and your friend both like the same girl. How far does “The Bro Code” really go? In theory, it’s a healthy message to never put a random girl before a friendship. The problem is that people often abuse it to their advantage in completely unfair ways. Where do you draw the line?

Say there’s a girl you met at a party and now hangs out with your group of friends. Your friend thinks she’s cute and wants to ask her out, but so do you. He tells you that he’s into her and on the inside you’re conflicted because you were thinking the exact same thing. Even though he’s your friend, it doesn’t mean you have to cross her off your list forever.

She’s a human being and no one can claim ownership of her. I’ve had friends who try to claim “dibs” on any girl who’s remotely attractive. I’ve been guilty of it in the past as well and it’s a ridiculous idea. You aren’t entitled to a person’s affection just because you said it out loud first.

So then, to be a good friend, you give your friend a shot. He hangs out with her a few times and nothing comes out of it. Maybe she’s not really into him or he doesn’t have the guts to make a move. Either way, things don’t progress between them and he’s still waiting around, hoping for something to happen.

Maybe, she’s actually interested in you or would be, given the opportunity. Remember, women know whether or not they’re into you early on. If she shows any interest in you, it will hurt your chances if you don’t take action. She’s either going to think you don’t like her or get tired of waiting and move on. It’s a lose-lose situation for everyone.

So how do you approach him about it?

Talk to him and say something like, “I noticed you’ve been hanging out with her and it hasn’t gone anywhere. I think she’s cool and I want to see if there’s anything there between us. Do you mind if I go for her?”

Unfortunately, there’s a decent chance that he might not be too happy about your request. But the truth is, you can’t let every girl go because you want to be “polite.” Just because he wanted to pursue her does not mean you should ignore your feelings. You’re not a bad person for wanting more for yourself.

It’s selfish for a guy to declare a girl as off limits when she hasn’t even reciprocated interest. If a buddy is willing to end a friendship over that, he’s either too insecure or not a true friend. Give him respect but don’t be afraid to be honest about how you feel. If you always put your own desires last, you’ll never achieve the life you deserve.

Have a girl in mind you want to date? Let me help.