Never Respect Out of Fear 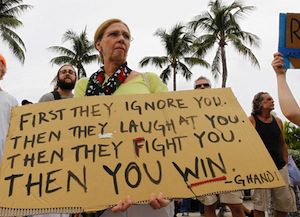 I hold the idea of respect in the highest regard. We’re all of the same blood, we all come from the same place, and a confident man sees the equality in everyone.

I had dinner with a former boss and mentor the other night. Much of what I’ve learned about being a genuine person I attribute to him and his highly moral values. He’s one of the few men I’ve met that I can honestly say lives each day with integrity and passion.

We were talking about current business ethics and how many companies have blatant disregard for their employees’ welfare. After taking a sip of his red wine, he looked at me and said:

“Never respect someone out of fear.

When you honor someone for their mistreatment or neglect for others, you’re letting them get away with it. You’re allowing them to continue without consideration for their actions. You’re accepting their wrongs and giving them more power.

A true man stands up for what he believes in. He fights for injustice rather than being just another faceless follower who settles for what has been given to him. This isn’t only about business, it applies to all aspects of life. You must cherish your principles that are dearest to you and never let them go.

We’re living in an incredible time where the world is more connected than ever before. Facebook allowed a single person to start a movement that overthrew a tyrannical government. We’re united because we all want the same things: to be treated with fairness, be listened to, and be given a chance for something greater.

Occupy Wall Street has been going on for 31 days now. What started as a few hundred people in New York has spread to hundreds of thousands supporting the cause in the streets worldwide, and millions more from their homes. With each passing day the crusade grows and becomes more focused.

We founded this country on protest (Boston Tea Party, anyone?) and earned our right to be respected. People are fed up of being pushed around, lied to, overlooked, and underappreciated. No longer will we tolerate this behavior simply because they are “bigger” and “stronger” than us. We are together as one and you cannot break our spirit.

This is the beginning of a revolution. Be a man of character and always command the respect you deserve in life.

The Atlantic posted an incredible series of pictures of Occupy protests from all around the world. Definitely check it out.