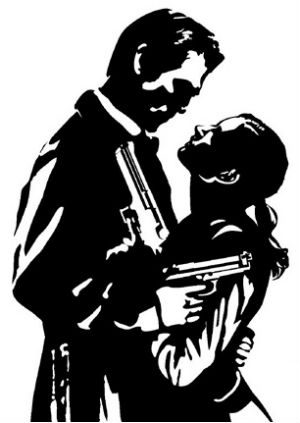 Who says you can’t learn something from a video game?

Three days after my birthday in the summer of 2001, I knew my life would never be the same. My thirteen-year-old self had been impatiently waiting for the release of Max Payne and that day had finally come.

Since then, I’ve been a diehard fan of the series. It introduced me into the film noir genre and the dark gritty style I’ve come to love. Most importantly, it became a story I felt a connection with and a persona I grew to admire. With its ominous atmosphere, memorable dialogue, and Max’s stupid scrunched up face — what young adolescent wouldn’t love it?

As an adult, I can now look back and find some applicable life lessons from it’s clever writing. In light of Max Payne 3’s release today, I’d like to share some of my favorite quotes from this epic antihero.

I don’t know about angels, but it’s fear that gives men wings.

Never let fear hold you back from meeting women and building the lifestyle you desire.

We’re all in the same boat and get nervous around the opposite sex. Accept those feelings because they will never go away. The sooner you embrace fear, the sooner you can control it and grow into the man you want to be.

Firing a gun is a binary choice. Either you pull the trigger or you don’t.

Honestly, whether you succeed or not with a woman often relies on a single action. Sometimes it’s the choice to approach the pretty girl sitting on the grass. Sometimes it’s suggesting a hang out and going for her number. Other times, it’s that gut-wrenching moment you decide to put yourself on the line and kiss her.

Don’t miss the opportunity to make something incredible happen. Next time you’re faced with one of those decisions, pull the trigger.

The trouble with wanting something is the fear of losing it, or never getting it. The thought makes you weak.

Focusing on the outcome of an interaction will likely lead to failure. Your need to win her attention will reek of desperation and insecurity. You will be timid, hide your romantic intentions, and be constantly fearful of saying the “wrong thing”.

Forget trying to win every girl over, it’s not going to happen. Go out with the mindset of “I’m having fun, let’s see what she’s about” rather than “I need to seduce her.” The more you’re out to simply enjoy yourself, the more attractive you’ll be to women anyway.

Trust me, ending up with the wrong woman can be much worse than being alone. I’ve known so many people who dove right into a bad relationship with the first person that gave them attention. Now all they tell me is how unhappy and “stuck” they are.

Avoid the pitfall of settling for less. You deserve a great woman and she deserves a great man. Ask yourself, “Am I going after her because she’s exactly what I want or because she’s the best I can do?” The answer should never be the latter.

Re-examining the things you once loved can provide new insight into your life today. It’s amazing what gems you’ll find from the most unexpected places. Thanks Max Payne, here’s to falling in love with you all over again.