My Interview With Undateable’s Brent Morin on Dating, Confidence, and Rejection 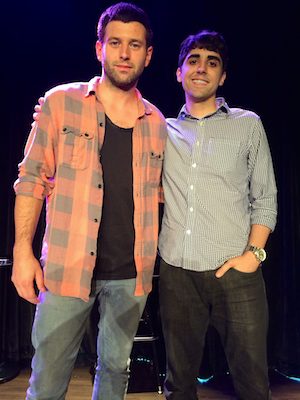 When I walked into the swanky Laugh Boston lounge, I was greeted by the star of NBC’s newest sitcom Undateable, Brent Morin. He looked me directly in the eyes with a huge grin and did what he does best – make jokes.

“Where do you want to sit?” he asked. Then he immediately pointed to a single chair amongst dozens and suggestively said, “Let’s share that one.” We laughed and I knew it was going to be a great interview.

Brent is spontaneous. He speaks with passion. He’s off-the-cuff and has an unmistakable energy about him. He also doesn’t write any of his material down, ever.

The stage is his outlet. And comedy is his therapy.

N: You started out as a PA (production assistant) for the Conan O’Brien show. That must have been an amazing experience.What’s the best lesson you learned from that?

B: Hard work pays off. Conan taught me the professionalism of comedy. It’s an everyday job. He puts the work in. He’s somebody who says, “we should do this” and then he’ll do it right away. He has that attitude and I watched that.

N: It’s just like in dating, you always have to be pushing forward.

B: Yeah you just have to do it! What do you have to lose? I think usually what we regret in our lives are the things we don’t do. The things we think were a big deal, weren’t. Even if we fall on our face, we realize later on that, you know what, that wasn’t a big deal. If we have the ability to say “What if?” in our mind, we’ll create things that are way more grandiose than they were in person.

So now you’re thinking, “I didn’t ask that girl out, what if she was the one?” Well she probably wasn’t the one, but you had to ask her out to find out. I’ve taken a lot of terrible risks.

N: I actually wrote an article exactly about that. Instead of always beating yourself up always asking “what if?”, go out there and find out the truth.

B: Yeah, it’s not going to hurt you that bad.

N: Standup is like dating in the way that you often have to get rejected to succeed. How have you learned to deal with that rejection, and even use it as motivation?

B: I compare it to getting punched in the face. You’re the most scared before you’ve ever gotten in a fight. The second you get hit, you realize it’s not the end of the world. You say, “that hurt, but it didn’t kill me.” It’s the same thing for standup or asking somebody out.

It gets better with age, because when you’re young or in high school, you’re in a bubble and everything is the end of the world. Not only does she turn you down, but everybody know about it.

In the real world, everybody gets turned down. Even Gosling has been turned down. It’s rare, but it happens. And once you know that, it makes it a lot easier. You got to realize that girl might say no, but who gives a shit?

You’re not really going to hurt my feelings if you turn me down, because somebody else won’t. But I had to take the shot and talk to somebody! I spent many years putting someone on a pedestal which is similar to my character in Undateable. He puts women on a pedestal and can’t talk to them, and that’s the difference between us. He’s like me when I was a teenager, and he’s going to get past that, I hope.

N: Tell me more about the premise of Undateable and your character Justin.

B: I play Justin, he’s a lovable loser – shirt tucked in, lemon drop drinking, kid who went to choral camp. He’s a one-woman kind of guy. Loves Disney movies and romantic comedies and grew up with John Hughes. He moves in with Chris D’Elia, a womanizer who can get a girl but can’t keep her because he doesn’t let himself open up emotionally.

The best way to describe the show is it’s a dysfunctional Friends, meets Cheers, meets the Odd Couple. With a touch of Big Bang because of the anti-social characters.

N: You ever think about being a dating coach? You understand people and their dynamics very well. It’s awesome.

B: I realized that in life, we always want to see the best in ourselves. It’s something we do even when we get our first roommate in college. You go, “Oh, he’s a mess.” As opposed to looking at yourself and blaming yourself for something. You learn that if you start blaming yourself, “Oh, I fucked that up. Or I’m not good at this.” — that’s when shit gets better.

Like, I realized I’m not a hot guy. I’m not a hot guy because I can’t wear a deep V t-shirt and a scarf at the same time. Jared Leto can do that shit. But knowing that about myself allows me to be like, who cares? Now I’m more confident because I’m starting to know who I am.

And to be honest with you, my dating life has been the best when I’m like that. I’m not intimidated by any girl. I’ll approach anybody, I don’t care who it is.

N: I’m sure a lot of my readers will relate to your character Justin on the show. Do you have a funny or embarrassing dating story to share?

B: Well my biggest problem is I try to be cool.When I was 17 I went out with a 22 year old dancer. She invited me to her place. I was a virgin at the time and I was like, “Oh man, I want to have sex.” I didn’t know how to open it up, though. I didn’t know if you show up naked in an oversized coat. She’d open the door and be like, “Let’s skip to dessert.” I didn’t know.

So I’m sitting there for hours not listening, just trying to figure out, “How I do open this up?” Long story short, we’re in the kitchen and I decide to make a move. I say something stupid like, “We should play house.” She says, “You wouldn’t even know what to do with me.”

So then I pick her up and put her on the kitchen counter. We start going at it and she ripped open my button-up shirt. When she did that, I yelled “My buttons!” because my buttons flew off. My initial reaction was that I was worried about my shirt because it was my dad’s shirt. And I had curfew and I didn’t want to explain the shirt.

I realized later, just let the shirt go. And all future shirt-ripping experiences. Fuck the shirt – stay late, sleep over.

N: I write a lot about how guys can be more confident and outgoing in their daily lives. Do you have any tips that have helped you in social situations?

B: Know who you are. Figure out who you are. So many people go through life and their personalities, outfits, everything changes as they grow older.

I think at a certain point, probably the mid and especially the late 20’s, is when you’re starting to figure yourself out. It’s where you really start to come into your own. You might be influenced by certain people in culture but when you start to figure out who you are – that’s the best. That’s when you can talk to anybody.

N: Exactly. Instead of thinking, “I need to impress everyone,” you should think, “who do I want to attract that likes the real me?”

B: You stop having that fear. Look, there’s no more lunchroom. There’s no more people making fun of you. You don’t have the shitty friends talking about how a girl turned you down. Who cares now!

I could go out right now and get turned down 17 times. Nobody will know about it but me. Maybe it hurts the ego a little bit, but shit happens. I could get turned down everyday, whatever. It happens to everybody. I know people who are very successful with women and you would assume their lives are amazing, and they get turned down every single day. And they just keep going. And I realized that it doesn’t matter who are you, it’s going to happen.

N: Do you have any Brent-Morin-approved tips for a first date?

B: Listening, I think, is the most important thing. Most people are trying to think of one liners. Just listen, but not fake listen. Listen, engage, and react.

I learned from a friend chivalry is not dead. The idea of opening a door for her. Not playing it too cool. Telling her she’s beautiful. Making it sexual, but not being creepy. The whole thing of saying, “god damn, you look good.” Don’t be afraid to be vulnerable in that sense. Why not tell somebody she looks good? She got dressed up because she wants to look good. Let her know.

Also, don’t brag about yourself. I hate when guys come in and puff their chest up. And they’re like, “I made a lot of money last year.” It’s like, “nobody gives a shit.”

N: I agree. I teach a lot of guys to be direct while being a gentleman. I believe in being forward and expressing your intentions.

B: My friends will be saying, “I think I’m in the friend zone with this girl.” And it’s because in the first conversation you didn’t let her know that you don’t want to be friends. Showing, “I’m sexually attracted to you. Do you have a boyfriend?” In some realm of the conversation.

You shouldn’t be like, “We should see a movie!” without any intention. Yes, it’s a nerve-wracking experience but just let her know, “god damn it, you look good.”

N: So tell us about your Laugh Boston show, what do you have in store for the audience?

B: You’re going to get an inside look at me. I’m a very energetic comic, I’m not a standstill guy. It’s more of a storytelling type of thing. Trust me, you’ll tell I did the freakin’ work. It’ll be a really awesome night.

N: How can fans stay connected with you?

You can check out Undateable, Thursdays on NBC at 9/8c . 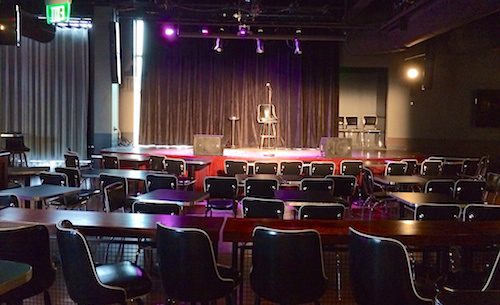 C’mon, look how gorgeous this place is! (Laugh Boston)

I’ll be at the 10:15 PM EDT show this Saturday at Laugh Boston, come join me! Standup makes a great date as well 😉

Tickets are only $18 ($28 for premium seats) with the discount code for my readers. Just enter “nick” in the promotional code box during checkout.